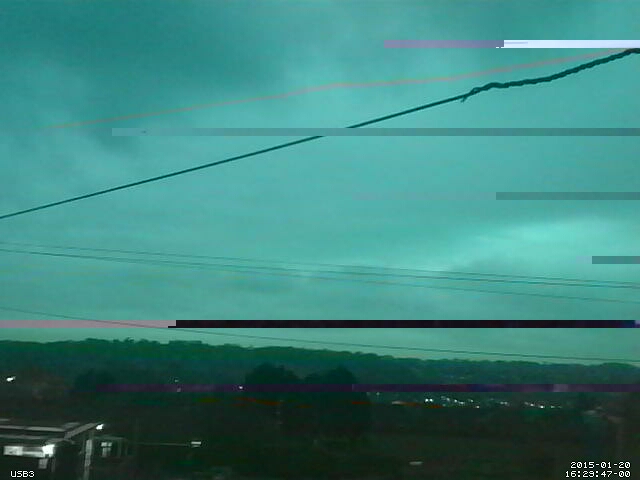 Hi Simon. You seem to be someone who knows what you're on about so I apologize if these questions are a bit basic. No disrespect intended. Does the problem happen when you only have one USB cam connected? Obviously there's nothing else bandwidth intensive like a hard drive connected to the usb port right? Can we see what the output of "lsusb" and "lsusb -t" is? What happens if you reduce the USB cam resolution from 640x480 down to 320x240? Does the problem remain? What's the CPU load on the system like? What does the ouput of a "top" command look like while the problem is happening? All the best Simon! -- AlanFord - 17 Feb 2015 Also, I suggest to try not using motion threads, but rather run three separate motion processes. Issue with picture corruptions when running more than one Logitech cameras were reported by some users: http://www.lavrsen.dk/foswiki/bin/view/Motion/BugReport2011x06x24x150605 http://www.lavrsen.dk/foswiki/bin/view/Motion/SupportQuestion2012x02x27x155712 And splitting them into separate processes is a work around -- TosiaraT - 12 Apr 2015

Attachments 4
Edit  | Attach | Print version | History: r3 < r2 < r1 | Backlinks | View wiki text | Edit wiki text | More topic actions
Topic revision: r3 - 12 Apr 2015, TosiaraT
Motion
Copyright © 1999-2022 by the contributing authors. All material on this collaboration platform is the property of the contributing authors.
Please do not email Kenneth for support questions (read why). Use the Support Requests page or join the Mailing List.
This website only use harmless session cookies. See Cookie Policy for details. By using this website you accept the use of these cookies.